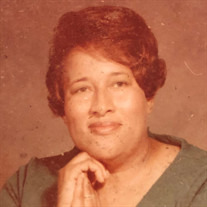 Speak her name: Fannie L. Pippins Fannie Lee Pippins (Sutton) entered this earth on March 4, 1938. In the midst of trying times, her mother, Carrie Belle Hicks, brought her into this world. She was born and raised in Gould, Arkansas. Carrie Belle, her beloved mother, died when Fannie was merely two years old. She later was taken in by her step parents, George and Florence Pippins. Through trials and tribulations, she matriculated and graduated from Nelson High School in Scott, Arkansas. As many did during that time, she moved to Little Rock, Arkansas and made the acquaintance of a charismatic young man named Marcus Louis Sutton, Jr. The two entered into a matrimonial union and produced three children: Bruce Edward, Miyosha Lamelle and Reginald Ricardo. Fannie was the most resourceful person on earth. She was known to sew clothes from scratch and often did so for her friends and acquaintances and mostly for her young daughter. The clothes that she made would rival anything that women could buy off the rack. She was also a whiz at numbers and worked for many years as a cost accountant for several companies in Little Rock. She spent hours nurturing Bruce’s athletic prowess and high levels of creativity; teaching Miyosha the finer points of being a woman in America while achieving and encouraging Reggie to pursue all of his dreams. In later years, she loved to talk about her grandchildren and all of their exploits. An unfortunate set of circumstances led to Fannie being hospitalized and immobilized. She succumbed to numerous ailments and maladies on December 17, 2018. She was 80 years old. Fannie was preceded in death by her mother, Carrie Belle Hicks; her step parents, George and Florence Pippins and her oldest son, Bruce Edward Pippins. She is survived by her children Miyosha Sutton Guinn and Reginald Ricardo Sutton; her grandchildren, Marlin Brown (Bruce), Brian Guinn, Damien Grandberry and Truman Guinn (Miyosha) and Alaina Curry and Hamilton Sutton (Reggie). She is also survived by her loving cousin, Maxine Livingston, her son-in-law, Keenan Guinn (Miyosha), her step brother Rickey Pippins and a host of other step siblings, family and friends.

Speak her name: Fannie L. Pippins Fannie Lee Pippins (Sutton) entered this earth on March 4, 1938. In the midst of trying times, her mother, Carrie Belle Hicks, brought her into this world. She was born and raised in Gould, Arkansas. Carrie... View Obituary & Service Information

The family of Mother Fannie Lee Pippins created this Life Tributes page to make it easy to share your memories.

Send flowers to the Pippins family.