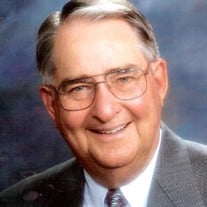 Eugene Francis Motter, only child of Carl Eugene and Gertrude Helena Windscheffel Motter was born in Gaylord, Kansas, on March 24, 1927. He was baptized and confirmed at Christ Lutheran Church. He attended schools in Gaylord and graduated from Kansas State University in 1950. He served in the 4th US Army Air Force In World War II. He married Harriet Anderson June 14, 1953. Their family included children: Mary Sims, (Frank) Elizabeth Salinas and James Motter (Julie); grand children: William Sims (Hallie), Richard Sims (Blair), James (Jake) Salinas, Sarah Salinas, Dolan Motter and Great Granddaughter: Scarlett Sims. He was a long time employee of Cities Service Oil Company (now Occidental Petroleum) retiring as Region Engineering Manager. He was active in his profession serving several terms on the board of the Society of Petroleum Engineers who named him a “Distinguished Member” in 1992. Gene was a registered Professional Engineer in several states and served on the New Mexico State Board of Registered Engineers. He was elected to the city council of Hobbs, New Mexico, where he later served as mayor. He was honored by the Hobbs Chamber of Commerce for “Outstanding Service to the City”. Following restructuring of his company, the family moved to Midland, Texas, in 1968, where he was Region Engineering Manager. Again he became active in community and professional activities. He served on the Midland Planning and Zoning Board. In 1984 he was named “Engineer of the Year” by the Texas Society of Professional Engineers. He was active in youth sports serving as Commissioner of the Midland Youth Baseball program. He retired from Occidental in 1988 and opened a petroleum consulting engineering office followed by three years as an officer with Breck Operating in Breckenridge, Texas.. He was active in the Lutheran Church being a charter member of two churches and served as president of the church council several times. He and Harriet elected to “retire” in Mansfield, Texas where they joined St. Gregory's Anglican Church. He accepted a position as Regional Representative with the Zimmark corporation a position he held for 14 years. He and Harriet traveled widely. He was a Rotarian over 40 years holding many offices and in 2007 received the “Rotary Builders” award for community and professional service. He was named "Honorary Member" of Rotary in 2012. He was a life time Mason and a member of Lambda Chi Alpha social fraternity. One of his great joys was celebrating their 50th wedding anniversary in the Cayman Islands with children and grandchildren: He was an avid golfer and served as president of the Walnut Creek Country Club Retired Men’s Golf Association, served two terms as president of the Mid Cities Senior Golf Association and was a long time marshal at the Colonial, Nelson, and the PGA Seniors Golf Tournaments. He enjoyed gardening, woodworking and photography. Honors and interment will occur at the Dallas/Fort Worth National Cemetery at a later date.

Eugene Francis Motter, only child of Carl Eugene and Gertrude Helena Windscheffel Motter was born in Gaylord, Kansas, on March 24, 1927. He was baptized and confirmed at Christ Lutheran Church. He attended schools in Gaylord and graduated... View Obituary & Service Information

The family of Eugene Francis Motter created this Life Tributes page to make it easy to share your memories.

Eugene Francis Motter, only child of Carl Eugene and Gertrude...

Send flowers to the Motter family.