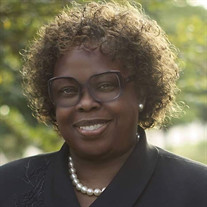 Florence Ellen McCall Bartley transitioned from this life to life eternal on Monday, October 7, 2019. She was born on May 25, 1944, in Hampton, Va., the second of six children born to the late Morris Otis and Bennie Earl McCall. The family later moved to Newport News, Va., where she was educated in the city’s public school system. She was an honor graduate of the class of 1962 of the former George Washington Carver High School. After graduating from high school, she began undergraduate studies at Virginia State College, now Virginia State University, in Petersburg, Va. While there, she joined the Army’s R.O.T.C. program, and upon graduation from college, she was commissioned as 2nd Lieutenant. In 1967, Florence embarked on a 13-year military career that included assignments in the states and abroad. During an assignment in Germany, she was affectionately known throughout the command as “Captain McCall” because she distinguished herself as Adjutant to the Manheim military community for three years. After returning from that assignment in Germany, she married Army officer Benjamin Hires in 1974. The young couple welcomed their daughter, Crystal Ellen Hires, in 1976. The union was later dissolved through divorce. Upon completion of active duty, Florence affiliated with the U.S. Army Reserves Command and was promoted to the rank of Major. When she was discharged from the Army, she traveled to Texas and accepted a position with the Department of Internal Revenue Service from where she later retired after 30+ years of service. Florence met Spencer Michael Bartley from New York in 1999, and after a long distance relationship for over a year, they were married in 2001. They lived in New York for a year after marrying and soon relocated to Texas where they made their home for the next 17 years. They enjoyed spending time together, traveling and going dancing. Spencer was her “Honey-do.” Ellen, as her Texas friends knew her, joined Alpha Kappa Alpha Sorority (AKA), Incorporated, Xi Theta Omega Chapter (Arlington) in January of 1991. Over the years she held several notable positions in the chapter including, Hospitality Chairman, Conference Chairman, Financial Secretary, Treasurer, Corresponding Secretary, 2nd Vice President, 1st Vice President, and President (2001-2002). She served as the Cluster Financial Secretary and Regional member of the Keeper of the Door committee. In 2016, Ellen was recognized as a 25-year member of the sorority and also became a Life Member. She spearheaded the ground work that ignited the start of the Arlington Foundation for Excellence in Education, a charitable arm of Xi Theta Omega Chapter which was founded in 2005. She loved AKA and AKA loved Ellen. Ellen was one of the founding members of Altrusa SETCER club which was chartered in January 1997. She served as Board President, Treasurer, and Director and was a member of several committees. She played a significant role in ensuring the club followed Robert’s Rules of Order and organizational procedures. In addition to her parents, Florence Ellen was preceded in death by her brothers, neQuiniso Abdullah (Walter O. McCall) and Dr. Maurice H. McCall. She is survived by her husband, Spencer, of Mansfield, TX; her daughter, Crystal Hires, of Euless, TX; siblings Mozell Y. Davis (Dr. Burton) of Harrisburg, NC, Dr. Alvin C. McCall (Anna Lackschewitz) of St. Louis, MO, and Eileen R. F. McCall of Newport News, VA.; sisters-in-law Ernestine McCall of Pontiac, MI, and Muminah Abdullah of Austin, TX; Goddaughters Devin Alexander, Kamry and Karrington Henson; five nieces, nine nephews, four grandnephews, eight grandnieces, two great-grandnephews, cousins, a host of extended family members, and friends who will miss her dearly. In lieu of flowers, contributions may be made to the Arlington Foundation for Excellence in Education, The Ellen McCall Bartley Memorial Scholarship.   Donations should be mailed to: Arlington Foundation for Excellence in Education Attention: Ellen McCall Bartley Memorial Scholarship P. O. Box 150301 Arlington, Texas 76015 For more information, visit www.arlingtoneducation.org.

Florence Ellen McCall Bartley transitioned from this life to life eternal on Monday, October 7, 2019. She was born on May 25, 1944, in Hampton, Va., the second of six children born to the late Morris Otis and Bennie Earl McCall. The family... View Obituary & Service Information

The family of Florence Ellen McCall-Bartley created this Life Tributes page to make it easy to share your memories.

Florence Ellen McCall Bartley transitioned from this life to...

Send flowers to the McCall-Bartley family.