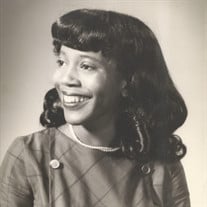 Earnestine Vaughan Jones was born in Waggoner (Tulsa County) Oklahoma on January 25, 1934 to Sophronia Waters Vaughan and her husband Ernest Vaughan. Early in her childhood, her parents divorced, and she and her mother moved to the Greenwood district of Tulsa, Oklahoma. Earnestine’s life changed for the better when her mother Sophronia met and married Sylvester Mitchell of Tulsa.. She attended Dunbar Elementary, George Washington Carver Junior High School, and graduated from Booker T. Washington High School in 1950. She received awards while attending school and was also a member of the Girl Scouts of America. After graduating from High School, she matriculated at Lincoln University in Jefferson City, Missouri. She was a member of the Delta Sigma Theta sorority chapter while at Lincoln. She met her future husband and life companion James E. Jones during a chance encounter at Lincoln and after a long courtship, they married in September 1954. In 1955 she graduated with a Bachelor of Science Degree. While she was completing her degree, her husband James was drafted into the United States Army so after graduation, she joined him at his new station in Germany. Towards the end of James’ draft obligation, she returned to Oklahoma in 1956 and later that year gave birth to the first of her two children, James. Her second child, Carol was born in Kansas City in 1960. September is called the “Family Month” because she married and later gave birth to her children in that month.. The young family lived in different parts of the country during the early year of their marriage, among which were Tulsa, Oklahoma, Fort Worth, Texas, Kansas City, Missouri, Oakland, California, and then finally Prince George County, Maryland outside Washington, D.C. where they settled to raise their family. Her husband James had begun work in the District of Columbia government, and once both her children were in elementary school, she also joined the D. C. government, starting first as a counselor at Junior Village and then working in the Food Stamp program then finally as an Analyst. It is often hard for a child or even a young adult to appreciate what a parent does while raising them. It is only after many years does a child realize the many things a parent does, like going to Parent Teacher conferences, taking the children on library trips, visiting the Smithsonian museum, visiting the parks in the area. Especially fun were the family trips taken each Summer from Maryland to Oklahoma to visit her parents and family, and then to Texas to visit her husband’s family. She and her husband worked to provide a safe and supportive environment for her children and also nieces and cousins that came to live with them. She was happiest being at home and doing things with the kids. Their marriage gave an example of what a strong, loving marriage is like. In 1992, her husband James became ill and she retired from the D. C. government to care for him. They moved to Arlington, Texas in 1993 to be closer to James’ family, joined the Cornerstone Baptist church and was active in Sunday School and became members of the senior group at the church. Their marriage and their love for each other was an inspiration to everyone they met. Their marriage continued for 64 years until her husband transitioned in 2018. Earnestine Jones departed on August 18, 2019.

Earnestine Vaughan Jones was born in Waggoner (Tulsa County) Oklahoma on January 25, 1934 to Sophronia Waters Vaughan and her husband Ernest Vaughan. Early in her childhood, her parents divorced, and she and her mother moved to the Greenwood... View Obituary & Service Information

The family of Earnestine Vaughn Jones created this Life Tributes page to make it easy to share your memories.