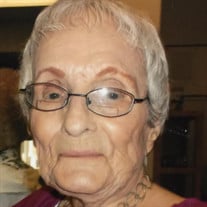 Dorortha May Henderson age 94, passed away May 2, 2017 in Mansfield, Texas. Funeral services will be held at Mansfield Funeral Home, 1556 Heritage Parkway, Monday May 8th, 2017 at 10:00AM, with viewing 1 hour prior, with Johnny L. Holt officiating. Dorotha was born Dorotha May Walker to John and Josephine Walker on January 25, 1923 in Mansville, Oklahoma. She relocated to Dallas.Texas and resided there for the next 75 years subsequently given birth to 8 children. She is preceded in death by her late husband, Melvin J Henderson, and 2 daughters Patrice D Arnold, age 7 and Donna S Wilson, age 61. She is also preceded in death by her parents and 8 brothers and sisters. Dorotha is survived by 6 children, Jearl Estell, (late Francis),77 of Arlington, Ella Camp,(the late Robert Camp), 74 of Conroe, Shirley Silcox,(the late Tommy Silcox), 72 of The Woodlands, Norma Barnes,70 of Lancaster, Johnny Holt (Vonda),66 of Hutchins, and Michael Arnold (Donna),61 of Mansfield, along with numerous Grandchildren and Great Grandchildren. Family of Dorotha would like people to know, that you never knew what she was going to say, but it was always the first thing she thought. She hardly ever held anything back. Whether it was the right time or place. She was always there for us. We learned a lot of things from mom. One of the most important things was to always try to do the right thing in life, not the easy thing. Mom was 94 when she passed. Sometimes we trick ourselves into thinking they will always be here with you. So we can't complain and we thank the Lord for giving us as many years as he did with her. We will miss her dearly. The family would like to give thanks to Methodist Hospital in Mansfield and Kindred Plaza Nursing facility for their care and support in Dorotha's final days.

Dorortha May Henderson age 94, passed away May 2, 2017 in Mansfield, Texas. Funeral services will be held at Mansfield Funeral Home, 1556 Heritage Parkway, Monday May 8th, 2017 at 10:00AM, with viewing 1 hour prior, with Johnny L. Holt officiating.... View Obituary & Service Information

The family of Dorotha M. Henderson created this Life Tributes page to make it easy to share your memories.

Send flowers to the Henderson family.