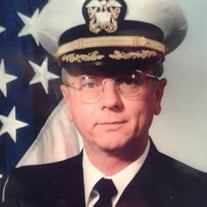 Don was born in Norfolk, Virginia on December 30, 1940 to Lieutenant Walter Allen Sharer of Carney’s Point, New Jersey, a recent graduate of the United States Naval Academy, and Mrs. Frances Dixon Sharer of Jennings County, Indiana. Don was a proud graduate of Plainfield High School’s class of 1959 where he served as the Senior Class President and Captain of the football team. Don was a proud graduate of Indiana University’s class of 1963 where he joined the Naval Reserve Officer’s Training Corps. Upon graduation from Indiana University, Don entered the United States Navy as a Lieutenant Junior Grade. Retired Capt. Don Sharer has dedicated his career to the United States Navy. Capt. Sharer was an Iranian Hostage for 444 days in 1979-1981. He led the America’s Destroyer Group during Desert Storm as it’s Chief of Staff. Capt. Sharer’s Naval career accomplishments are truly endless. Capt. Sharer retired with full honors in 1993. Don has been the most loving and dedicated husband and is survived by his beloved wife, Judith K. Sharer of Mansfield Texas. Don is survived by his son Jeffery Allen Sharer of Virginia Beach VA. Daughter, Jennifer Sharer Knight and husband John Knight of Chesapeake Va. Step Daughter’s, Cheryl Talley of Mansfield Tx. Joan McLain and husband Alan McLain of Cedar Hill, Tx. Don is survived by 5 grandsons, 5 granddaughter’s, as well as, 3 great grandchildren, who will miss their Papa Don dearly. Don is preceded in death by his father, Walter Allen Sharer, his mother, Frances Dixon Sharer Smith, his brother, Rob Jeffery Sharer, and his step-father, John Warburton Smith. In lieu of flowers, or in conjunction with flowers, perhaps donations to specialops.org which is a foundation founded by the family members of those lost during Operation Eagle Claw. It helps families of those who have lost loved ones in Special Ops —particularly with education costs which Don would have loved.

The family of Captain Don Allen Sharer created this Life Tributes page to make it easy to share your memories.

Send flowers to the Sharer family.