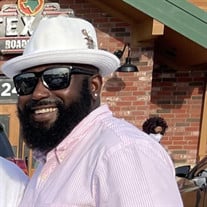 "Love is patient, love is kind. It does not envy, it does not boast, it is not proud. It does not dishonor others, it is not self-seeking, it is not easily angered, it keeps no record of wrongs. Love does not delight in evil but rejoices with the truth. It always protects, always trusts, always hopes, always perseveres. Love never fails. But where there are prophecies, they will cease; where there are tongues, they will be stilled; where there is knowledge, it will pass away.” 1 Corinthians 13:4-8 Desmond Antywon Carter was born on October 3rd, 1979, to Miguel Antywon Allen and Ruby Helen McIntosh in Fort Worth, Texas. Desmond grew up in Fort Worth, Texas, attended Arlington Independent School District, and graduated from Bowie High School in 1998. Desmond accepted Jesus Christ as his personal Savior as a young adult. After graduating high school, Desmond attended the University of Houston where he met his future wife, Shasta Borden, and to her surprise one day he had enlisted in the United States Air Force. He returned to Fort Worth after his service was completed and soon married the love of his life, Shasta. From this union, two boys were born, Desmond II and Davion. Desmond was a loving father and husband that led by example. He loved nothing more, on this earth, than his wife and two boys (though the Cowboys were a close second!) He loved God, was a man of Faith, and he never met a stranger. Desmond loved life and people and could always be found helping someone in need. He was a jack of all trades: an IT guy, a farmer, played sports, coached peewee football and so much more. Above all those other things, he was a diehard Dallas Cowboys fan...like diehard...for real! Desmond was an ambitious entrepreneur and had just accomplished his lifelong dream of becoming a business owner/partner of Daiquiris at The Palace. He also was continuing his education in Cyber Security at CDI and was pursuing real estate ventures, as well. Desmond is preceded in death by his paternal grandmother, Mildred Davis; paternal grandfather, Arthur Pete Davis; bonus grandfather, Herb McIntosh, Sr.; paternal uncles, Dwight Davis and DK Allen; bonus grandfather, Wendell Burroughs; bonus uncles, Ronnie McIntosh, Ray Gene McIntosh, and Herb McIntosh Jr.; and bonus aunt, Thelma Jean McIntosh. Desmond leaves to honor his legacy his wife of 18 years, Shasta Carter; his two sons, Desmond Carter II and Davion Carter; Diamond, his beloved American Bully; his mother, Ruby Helen McIntosh (Stacey); his father, Miguel Allen (Jackie); grandparents, Anita Bryant, Ruby Carter and bonus grandmothers Thelma McIntosh and Flora Lias; mother-In-Law, Lillie Gordon (Richard); brother-In-laws, Ray (Amanda) and Leonard Ray; sister-In-law Tracy (Robert), siblings, RaMel (May Ann), Nicole, Stacey Jr. (Yini), Chris, Crystal (Milton), Chelsea, McKinzi, and a host of other loving relatives and friends.

"Love is patient, love is kind. It does not envy, it does not boast, it is not proud. It does not dishonor others, it is not self-seeking, it is not easily angered, it keeps no record of wrongs. Love does not delight in evil but rejoices with... View Obituary & Service Information

The family of Desmond Antywon Carter created this Life Tributes page to make it easy to share your memories.

&quot;Love is patient, love is kind. It does not envy, it does not...

Send flowers to the Carter family.