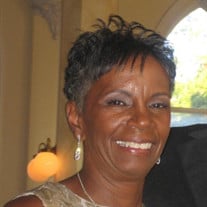 Deborah (Branscomb) Roberts was born October 6, 1950, in San Monica, California. She was the fourth child and only girl out of seven born to James and Evelyn Branscomb. Deborah graduated from Gardena High in 1968; shortly after graduation, she attended Trade Tech Community College, where she received an Associate Degree in Home Economics. After completing her Associates, Deborah worked at Westlock corporation until the company moved out of the country. Deborah married James Curtis Roberts in December of 1973 from the union Le’Rae and Donavon Roberts were born. Deborah and her husband James moved to Texas in the mid-’80s. While in Texas, Deborah worked as a factory worker, home health aide, school bus driver, night stocker, and pie maker. On and off the Job, Deborah was caring, fair, trustworthy, and kindhearted to all she encountered. Deborah gave her all to provide for her loved ones, often working two jobs at once. She enjoyed spending time with her family and friends, eating out, and traveling. Deborah could always find the bright side to a negative situation and never allowed the hardships in life to keep her down. She believed in standing up for what was right no matter the consequence, but she also knew how to cut loose and have a good time. Deborah passed away at home surrounded by loved ones on October 3, 2021. Deborah will be preceded in death by her husband James Roberts, brother Marvin Branscomb, her parents Evelyn Branscomb, and James Branscomb Sr. She is survived by her son Donovan Roberts and daughter Le’Rae Norwood as well as her stepchildren Estebon, Brent, Marche, Shannon, and Darrell. Deborah is also survived by her brothers Billie, James (Shahid Mubarak), Kenneth, Ronald, and Kerry Branscomb. She also leaves behind three grandchildren Bailey Norwood, Wendie Norwood, Norman Norwood III, and a host of nieces and nephews.

Deborah (Branscomb) Roberts was born October 6, 1950, in San Monica, California. She was the fourth child and only girl out of seven born to James and Evelyn Branscomb. Deborah graduated from Gardena High in 1968; shortly after graduation, she... View Obituary & Service Information

The family of Deborah Roberts created this Life Tributes page to make it easy to share your memories.

Send flowers to the Roberts family.