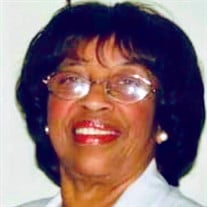 Remembering the Life of Deaconess-Mother Lucille Scott Victoria Let not your heart be troubled: ye believe in God, believe also in me. In my father’s house are many mansions: If it were not so, I would have told you. I go to prepare a place for you, I will come again, and receive you unto myself; that where I am, there ye may be also. John 14 1-3 On the afternoon of April 22, 2022, at approximately 4:35 p.m. God descended his angels from heaven to come and carry the spirit of Lucille home. He saw that she was tired and had suffered enough. It was time for her to take her rest. Lucille Scott was born on January 10, 1939, to proud parents, Rufus Scott Sr. and Cornelia Hall-Scott in Crowley, Louisiana. She was the third oldest of thirteen children. She accepted Christ at an early age. She was baptized by the late Reverend George Trac at Providence Baptist Church in Crowley, Louisiana. Lucille completed her education at H.C. Ross High School in Crowley. In 1957, in her junior year, she represented her high school as their queen. That title couldn’t be more befitting of her. Lucy as she was affectionately called was a self-taught chef and one of the best cooks in the area. She prided herself on preparing homecooked meals for her family. On June 07, 1958, she married her sweetheart and love of her life Jason Victoria Sr. They moved their growing family to Pacoima, California where they resided for several years. Later, they relocated to Eunice, Louisiana to finish raising their nine children near family. Lucille was employed with St. Landry Parish School Board as a bus driver. She was also a businesswoman and entrepreneur. She owned and operated a café with her husband. They were members of New Zion Baptist Church under the leadership of Dr. Joshua G. Frank Sr., for 35 years. There she served as a deaconess and sang in the adult mass choir. After retiring, she and Jason relocated back to California to be near their children. Being the exceptional mother that she was, she decided to become a foster parent to over 100 children throughout her lifetime. Lucille spent her life helping those in need. While residing in California, they became members of The Burning Bush Baptist Church under the leadership of Bishop David Denson Jr. She was a faithful servant of 27 years and served as a deaconess and church mother. She loved the Lord with all her heart and was dedicated to serving him. She shared a special bond with her Pastor, First Lady, and their family; their bond was only separated by blood. In her golden years, she (Jason) relocated to Texas where she finished out her final earthly stay. They became members of Bethlehem Baptist Church under the Pastorship of Dr. Michael Evans, Sr. Lucille died peacefully at home surrounded by her loving husband Jason of 63 years, along with her children, and grandchildren. Her loving memory will be cherished by many. Her parents and children: Shawn, Carlos, and Bryan preceded her in death. Lucille leaves to cherish her memory her beloved husband Jason Victoria Sr; her six children Michael (Dawn) Victoria of Mansfield, Texas, Andrea “Michelle” (Early) Andrews of Fort Worth, Texas, Jason Jr. (Felicia) Victoria of Eunice, Louisiana, Ursula (David) Ceasar of Sunset, Louisiana, Craig (Karen) Victoria of Arlington, Texas, and Katina (Alvin) Henry of Cypress, Texas, one daughter in love, Daphney (Bryan)Victoria of Eunice, Louisiana, her bonus son Dave Arnold of Eunice, Louisiana, her siblings, Sylvia Freeman, Rufus Scott Jr., Dorothy Wright, Charles Scott, Katherine Hollins, Marie Scott, Wanda Reed, Goldman White, Betty Stevens, Danny White, Bernardine Martin, and Donald Collins Sr. Also cherishing her memory are thirty-two grandchildren, seventy-seven great grandchildren and two great-great grandchildren.

Remembering the Life of Deaconess-Mother Lucille Scott Victoria Let not your heart be troubled: ye believe in God, believe also in me. In my father&#8217;s house are many mansions: If it were not so, I would have told you. I go to prepare a... View Obituary & Service Information

The family of Deaconess-Mother Lucille Scott Victoria created this Life Tributes page to make it easy to share your memories.

Send flowers to the Victoria family.