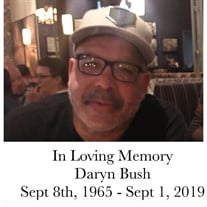 Daryn Bush was born in Los Angeles, California on September 8th, 1965, to two loving parents James Bernard Bush and Ruby Jane Bush. As a child Daryn was a rambunctious kid always on the go. The 4th son of 6 children Daryn set to make his mark in the family with sports. Daryn absolutely loved sports and could play in a game everyday if he had the opportunity, he had that much energy. From competitive baseball, basketball and football he played it all. Growing up, Rosecrans Park (CA) was the place to be for an athlete and as a young boy and teenager this is where he learned what it is to be a team player. In addition to playing recreational league sports Daryn also attended and played sports for Gardena High School (CA), a place he still loved to remanence about as an adult. Along with sports, he loved fixing up old cars, attending nascar and drag races with his son, collecting hot wheel cars, and he had an impressive baseball card collection as well. In 1995 Daryn met his love Lynette Bush and they formed a union in 1996. Their union together produced two children Kristen Nicole Bush (22) and Ryan Nicholas Bush (15). Daryn worked for Xerox for a number years however, later in life chose to change careers and pursue his childhood dream of being truck driver. In 2007 the couple moved to Grand Prairie, TX. and Daryn continued his dream of being a truck driver, he absolutely loved it! The freedom of being on the road and his natural knack for always wanting to compete, always guaranteed he would deliver his loads on time. At the time of his death, Daryn was employed by J.B. Hunt in Waxahachie TX. a company he loved working for. He would frequently take pictures of his truck or snap a picture of scenery during a stop, to capture the memories of his road trips. In life you should earn money during what you love, and this is certainly what he did as an employee of J.B. Hunt. Daryn loved to talk and joke around and always seemed to know a little something about a lot. A heart of gold is what he had and will always be remembered for willing to do absolutely anything for the people he loved. He leaves behind to cherish his memory his immediate family Lynette, Ryan, and Kristen Bush, mother Ruby Bush, brothers Michael Collins, Eric Bush, James Bush, Billy Bush wife (Toni), sister Karen Valentine husband (Ellis), brother in-laws, Leon, Jerrod, Timothy and Trevion Devers wife (Ronetta), father in law Leon Devers wife (Sally) and a host of nieces, nephews, cousins, and friends.

Daryn Bush was born in Los Angeles, California on September 8th, 1965, to two loving parents James Bernard Bush and Ruby Jane Bush. As a child Daryn was a rambunctious kid always on the go. The 4th son of 6 children Daryn set to make his mark... View Obituary & Service Information

The family of Daryn Bush created this Life Tributes page to make it easy to share your memories.

Send flowers to the Bush family.