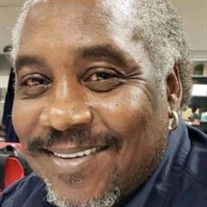 On the morning of February 19, 2021, God sent His angels to quietly whisper, “it’s time to come come”. Dana DeGerard McCullough transitioned and went from labor to reward to be with the master. Dana was born September 15, 1963 in Galveston, Texas to Donald and Beverly McCullough. He attended public schools in San Jose, California and later attended college and played football for San Francisco State College where he was also a member of Omega Psi Phi. Dana’s love for music led him to the Singspiration Choir, and later becoming a member of Glad Tiding COGIC in California. Dana also had numerous professional engagements around the country, including performing with Tramaine Hawkins and other celebrities. Dana was employed by American Airlines for over 24 years, working in Kansas, Miami and Dallas (DFW), where he was employed until his death. In 2017, Dana finally met the love of his life and married Vivian (Terrell) McCullough, his wife of only 3 years. Dana loved his family, had a passion for music, and unconditional love for God. In addition to his wife Vivian, Dana is survived by his mother Beverly Wrenn, twin sister Donna Harris (both of San Jose California), sister Franzola “Kitty” (Vel) Sullivan, Las Vegas, Nevada. Brothers Michael and John McCullough, (both of Seattle Washington) and brother Nicholas Green (San Jose California). Uncles; Kenneth and Gregory Austin (Houston, Texas), Isaac “Uncle Bobby” (Katherine) Wrenn (Galveston.) 4 grandchildren 5 great grandchildren and a host of sister in-laws, brother in-laws, nieces, nephews and friends.

On the morning of February 19, 2021, God sent His angels to quietly whisper, &#8220;it&#8217;s time to come come&#8221;. Dana DeGerard McCullough transitioned and went from labor to reward to be with the master. Dana was born September 15,... View Obituary & Service Information

Send flowers to the McCullough family.