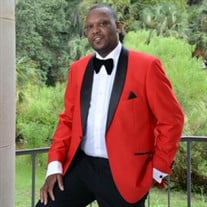 Reflections of Life Craig "Pearl" Weaver was born to Theodis Warren, Jr and Girthal Blackmon on February 11, 1971, in Hughes, Arkansas. Craig was raised in Palestine, Arkansas by his maternal grandparents, Arbie and Hadie Weaver, whom he fondly called daddy and mama. Craig was a star basketball player for Palestine High School where he graduated in 1989. Craig grew up attending Hedge Providence Missionary Baptist Church in Palestine, Arkansas under the leadership of Rev. Napolia Grace. After graduating High School, Craig attended the University of Arkansas at Pine Bluff (UAPB). Craig was a veteran of the US Army where he received The Army Achievement Medal Award in 1992. After the Army he made North Texas (Tarrant County) his home. Craig prided himself on his strong work ethics, something he learned from his maternal grandfather, Arbie Weaver. For over 25 years he worked for nursing home facilities in Tarrant County as kitchen director and certified Dietary Manager. Over the last 13 years Craig created special memories with his wife Mecca and out of this beautiful union a daughter was born, Mercedyz Weaver. Together they enjoyed spending time with their kids, extended family and their many friends. Craig loved to cook (and everyone loved to eat his food), entertain and was always the life-of-the-party. You could always hear him shouting for his favorite teams, the Green Bay Packers and the Boston Celtics where he was always the loudest in the room. In his free time he enjoyed working on classic cars and getting them “car show” ready, where he won many awards for his creativity and skilled work. Craig departed this life on April 18, 2022 in Arlington, Texas. Craig is preceded in death by his maternal grandparents; Arbie and Hadie Weaver; his paternal grandparents, Theodis and Minnie Warren, Siblings; Jermonie Weaver, Angela Weaver and Keith Willis. Craig’s memories will be cherished by those who loved him; his wife, Mecca Weaver; sons, Stephon Weaver, Malik Weaver, Jaylen Peterson and daughter, Mercedyz Weaver; David "Pooh" and Eboni Davis, whom he loved as his own; his parents, Girthal (David) Blackmon of Little Rock, Arkansas and Theodis Jr (Betty) Warren, of Memphis, Tennessee; two brothers, Michael Warren and Marcus Blackmon, one sister; Sonya Blackmon-Pierce; a special aunt, SueVeria Dickens of North Richland Hills, Texas; Grandmother-in-law, Dorothy Morgan of Ft. Worth, Texas; mother-in-law and father-in-law, Sharon and Terry Nixon of Texas; aunts, uncles, nieces, nephews, cousins, co-workers, and a host of friends. Arrangement entrusted to Mansfield Funeral Home – 1556 Heritage Parkway, Mansfield, TX 76063

Reflections of Life Craig "Pearl" Weaver was born to Theodis Warren, Jr and Girthal Blackmon on February 11, 1971, in Hughes, Arkansas. Craig was raised in Palestine, Arkansas by his maternal grandparents, Arbie and Hadie Weaver, whom he... View Obituary & Service Information

The family of Craig Weaver created this Life Tributes page to make it easy to share your memories.

Send flowers to the Weaver family.