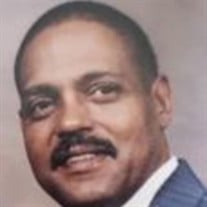 Effective immediately, all families and guests entering Mansfield Funeral Home must wear face masks. Join Mansfield Funeral Home as we celebrate the life of Clarence "Rick" Manning via livestream at: https://vimeo.com/event/132864 Clarence R. Manning was born September 14, 1949 in Detroit, Michigan. Better known as Rick to family, friends and coworkers, but his wife called him C.R. His parents were Frank Manning, Jr. and Henrietta V. Lewis-Manning. Rick was the youngest child of three to this union. Rick attended the Detroit Public Schools graduating from Central High School Class of 1968. After graduation Rick began his career with General Motors. After a few months he joined the Air Force in the Fall of 1968 where he served during the Vietnam War. After serving he continue his career at General Motors. He received his Associates in Science in General Management from Detroit College of Business in 1977. He was baptized at Greater Grace Temple in 2003. He retired after working for General Motors for 30 years in 2005. Rick loved sports. He played Softball and was an avid supporter of all his Detroit sports teams. He loved to laugh. Family was what was most important to him and he showed that by the way he loved his wife and sons. He loved taking them on family trips and took Jackie someplace special each year for their anniversary. Rick admired his sons. He was proud of both of them and would frequently boast about their accomplishments. Rick adored his grandchildren. He possessed a special relationship with each of them from birth. He departed this life as we know it on Tuesday, June 23, 2020. He leaves to rejoice in his celebration of his life his wonderful Wife: Jacqueline M. Manning, two sons Ricardo O. (Victoria) Manning, Sr. and Eric Q. Manning, six lovely grandchildren Lahjaryel D. Robinson, Ricardo O. Manning, Jr., Joshua T. Manning, Jasmine M. Manning, Leelaind O. Manning, and Halle R. Manning, one little sister Linda (Lil Bit) Davis, Special Cousins Frank Williams and Luther Collins, two special nephews Keith A. (Tenisha) Day and Emmanuel J. Johnson, one special niece Danyelle Harton and many other relatives and friends. His parents and sisters Rev. Francine G. Thomas and Harrietta V. Henderson all proceeded him in death. His last words of hope is those of you that are not baptized in Jesus’s name and speak with tongues as the spirit give utterance would accept Jesus Christ into your life for this is the only way. A poem just for you. True Love Thank you dear God, for being so kind, You gave your son, for these sins of mine. The price He paid, was a great cost, but if He had not died, I would have been lost. I believe now, without a doubt, before Jesus came, there was no way out. While He was here, he tried many ways, to teach the people, what God to praise. But they wouldn’t listen, to what He said, so He walked the water, and raised the dead. But they still doubted, and wouldn’t be aroused, so He took a few fish, and fed several thousand. Now the kings wondered, who can this man be? He makes the mute to talk, and the blind to see. They ordered Him arrested, and brought to trial, they could find no wrong, and the crowd went wild. Give Him to us, cried all of them. We’ll take Him to Calvary and crucify Him, Hail King of Jews they all cried, and nail Him to the cross and pierce His side. And so it was done, just as the prophets had said, then the third day He arose from the dead. This poem may not be good, but every word is true, I believe Jesus died for me, how about you? (6A--4-18-1981) –Nathaniel Ligons

The family of Clarence "Rick" Manning created this Life Tributes page to make it easy to share your memories.

Send flowers to the Manning family.