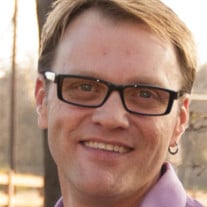 It is with sad hearts we announce the passing of Bobby Smiley, Jr. on May 29th, 2017 in the arms of Gene and with their children and his father by his side. After a long hard fight with Cancer Bobby gained his wings in heaven where he can watch over us all forever. Bobby is survived by his husband Gene Hintz and their children Zachary Smiley and Corey Smiley of Grand Prairie TX, Shelby (Kentrell) Joyner of Burleson TX and grand-daughter Fae; his parents Bob and Kay Smiley and his sisters Renee Twitty of Lake Worth, TX and Alice Marie Smiley of Grand Prairie TX; his mother-in-law Marianne Hintz, sister-in-law Bettyann (Larry) Bernath, brother-in-laws Jim (Cindy) Hintz, Don (Margret) Hintz and Jerry (Michelle) Hintz all of Medicine Hat, Alberta Canada. As well as numerous nieces, nephews, cousins and friends. Bobby was preceded by his Grandmother Alice Jocelyn Wilson, Grandfather Robert “Tom” Smiley; Grandmother Viola Blick; Grandfather Willard “Johnny” Johnson; Step-Grandmother Wilma “Dino” Johnson; Grammie Marian E. Nichols, and father-in-law Ben Hintz. Bobby will be sadly missed by all who knew him. He was born and attended school in Grand Prairie Texas. He worker at Six Flags over Texas in Arlington during high school and graduated from Grand Prairie High. Bobby later worked at Purina Mills in Fort Worth, and finally Snap-On Tools for the last 17 years. During his life, he amassed countless friends and touched all their lives in his special way. Bobby’s outgoing personality, positive attitude, and infectious smile made everyone love him at first sight. Everywhere he went he made friends, Bobby never knew a stranger. He met the love of his life, soul mate and best friend, Gene Hintz in 2005. They became inseparable and after several years together they married in 2013 in San Diego California on Bobby’s birthday. Bobby and Gene lived in Arlington Texas and where they hosted many memorable get-togethers with family and friends. Bobby was especially proud of their backyard and fish pond. He spent hours watching the fish. He took great pride in his magnolia tree and made a point to smell every bloom then make Gene smell them. Bobby loved to read and owned every James Patterson collection. He loved the Dallas Cowboys and no matter how well they played, remained a dedicated fan. Bobby loved country music especially the Zac Brown Band. He enjoyed karaoke and often entertained friends with his rendition of Chicken Fried and Sold: Grundy County Auction. He enjoyed going out with Gene and their friends and indulged in the occasional “Bobby Juice” (rum and Dr. Pepper) when he could. Their antics were well documented on Facebook. Bobby loved his children and was particularly proud to be called grandpa by Fae. Bobby will be dearly missed by all who had the privilege to know him and be touched by his selfless demeanor, kind heart and unconditional love. The family would like to thank the many Doctors, nurses and hospital staff at USMD in Arlington, UT Southwestern in Dallas, MD Anderson in Houston, and Arlington Memorial for all the support they provided throughout Bobby’s 9 year fight. Bobby spent countless hours raising money for the Leukemia and Lymphoma Society. In lieu of flowers donations to the Leukemia and Lymphoma Society are appreciated. http://www.lls.org/ To view the memorial service, go to https://www.facebook.com/mansfieldfuneralhome/ Like our page and when we go LIVE you will have access to the service.

It is with sad hearts we announce the passing of Bobby Smiley, Jr. on May 29th, 2017 in the arms of Gene and with their children and his father by his side. After a long hard fight with Cancer Bobby gained his wings in heaven where he can watch... View Obituary & Service Information

The family of Bobby Smiley Jr. created this Life Tributes page to make it easy to share your memories.

It is with sad hearts we announce the passing of Bobby Smiley,...

Send flowers to the Smiley family.