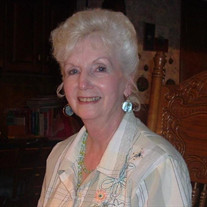 Due to the prevalence and unpredictability of the current Covid strain, the family has made the difficult decision to cancel Betty's memorial service scheduled for 2 pm, Saturday, Jan. 8. You may leave a tribute on her obituary page. Betty Jo Searcy Griffin, 89, passed away on November 18, 2021, after a long full life. She was born on June 16, 1932, in Wichita Falls, Texas -- the middle child of five siblings. Her early life was not only marked by the waning years of the Great Depression but by a congenital heart defect. In her late teens, she was one of the first five patients in Texas to undergo open heart surgery. After graduating high school, she married Paul R. Flake Jr. and gave birth to two boys before the family moved to California where they lived for five years. After a divorce, she and the boys moved back to Texas where she eventually landed in Dallas. Raising her sons as a single mother, she held jobs with increasing responsibility including secretarial stints in a medical practice, a major international airline, and an oil and gas company, where she was an executive secretary whose skills in shorthand were in high demand. Her time with the airline allowed her to indulge in travelling around the world. Among the places Betty visited were Northern Europe, Ireland, the Mediterranean, Mexico, South America, Panama, and Hawaii. The highlight of her travels was a trip to the Holy Land, where she said that she was able to “walk in the footsteps of Jesus.” In her Golden Years, she settled on a ranch near Mullin, Texas, with her husband Lamar Griffin. Besides enjoying magnificent Hill Country sunrises and growing a lush garden outside her back door, Betty also participated in many ranch activities including herding cattle and assisting in the birth of a calf. Mules and goats also called the ranch home, but her most beloved animals were Magic, a black Labrador retriever, dachshunds Jody and Maggie, and two cats – Ginger and Tigger. Betty participated in many social activities in the area, attending services at the First Methodist Church of Goldthwaite, where she sang in the choir; holding leadership positions in the local chapter of United Methodist Women; as well as hosting and attending meetings of the Goldthwaite Quilting Club. She made many quilts for her children and grandchildren. She loved cooking for her family and made memorable fried chicken, almond roca, fudge and lemon meringue pie. She is survived by a brother, Ray Searcy; a sister, Annie O’Shaughnessy; two sons and their wives, Marc and Tama Flake and Dan and Linda Flake; a granddaughter, Shelly; and two grandsons, Brian and Michael. In lieu of flowers, the family requests that donations be made in her honor to the Alzheimer’s Association https://www.alz.org/

Due to the prevalence and unpredictability of the current Covid strain, the family has made the difficult decision to cancel Betty's memorial service scheduled for 2 pm, Saturday, Jan. 8. You may leave a tribute on her obituary page. Betty... View Obituary & Service Information

The family of Betty Jo Griffin created this Life Tributes page to make it easy to share your memories.

Due to the prevalence and unpredictability of the current Covid...

Send flowers to the Griffin family.