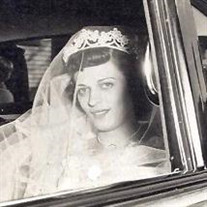 Arlene Katherine Patricco passed away on March 19, 2019 at the age of 85. Arlene was raised in Hillside, NJ, where she met and married Frank Anthony Patricco in 1955. Frank and Arlene eventually moved to Clark, NJ, where they raised two daughters and enjoyed 32 years of an extremely loving and happy marriage before Frank died unexpectedly at the age of 55. Heartbroken at having lost the love of her life, Arlene never remarried or dated another man. She was quoted as saying “Why try the rest when you’ve already had the best?” In 1989, Arlene moved to Kingwood, Texas to care for her elderly parents who were both simultaneously diagnosed with terminal illnesses. Arlene had also acted as caretaker for other family members who were sick and/or terminal and had developed a reputation as the unofficial nurse of the family, though she was quick to dismiss any praise for her efforts. Arlene was always admired for her loyalty, hard work and selflessness. She was a true post-war stoic, in that she rarely, if ever, complained or shied away from putting in the effort required to complete every task to the best of her ability. She lived a life of self-sacrifice and modesty and was never boastful or arrogant. Arlene did have a very silly sense of humor and though at first was sometimes mistaken as standoffish due to her slight nervousness when meeting new people, was actually extremely warm-hearted, outgoing and funny. She was always a very welcoming and gracious hostess to any guest, be they stranger, family or friend. Arlene was happiest in the company of babies and small children. Aside from her marriage to Frank, her grandchildren and great-grandchildren were the greatest joy of her life. Arlene was the eldest daughter of Fred & Regina Schwahl, formerly of St. Petersburg, Florida. Sadly, Arlene was recently predeceased by her two younger sisters, Katherine Schwahl of Spring, Texas and Dolores Egan of Kingwood, Texas. She is survived by her two children, Lori Ann Draper of Midlothian, Texas and Susan Lynne Mehalick of Roswell, Georgia, grandchildren Sean Draper, Christopher Draper, Danielle Draper and Jackson Foster, and great grandchildren Kayleigh Draper, Addison Draper, Paislee Draper, and Sadie Draper, as well as many adoring nieces and nephews. One night I dreamed a dream. As I was walking along the beach with my Lord. Across the dark sky flashed scenes from my life. For each scene, I noticed two sets of footprints in the sand, One belonging to me and one to my Lord. After the last scene of my life flashed before me, I looked back at the footprints in the sand. I noticed that at many times along the path of my life, especially at the very lowest and saddest times, there was only one set of footprints. This really troubled me, so I asked the Lord about it. "Lord, you said once I decided to follow you, You'd walk with me all the way. But I noticed that during the saddest and most troublesome times of my life, there was only one set of footprints. I don't understand why, when I needed You the most, You would leave me." He whispered, "My precious child, I love you and will never leave you Never, ever, during your trials and testings. When you saw only one set of footprints, It was then that I carried you."

Arlene Katherine Patricco passed away on March 19, 2019 at the age of 85. Arlene was raised in Hillside, NJ, where she met and married Frank Anthony Patricco in 1955. Frank and Arlene eventually moved to Clark, NJ, where they raised two daughters... View Obituary & Service Information

The family of Arlene Katherine Patricco created this Life Tributes page to make it easy to share your memories.

Send flowers to the Patricco family.