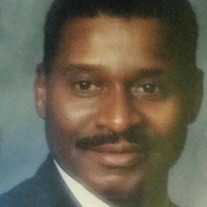 Andrew Zenoble Prestwood III affectionately known to most as “Juni” was born in Chicago, Illinois on May 5, 1942 – to the union of Andrew Z. Prestwood, Jr. and Eldridge Lee Thomas. On June 6, 2017 - God allowed Andrew to take a quiet journey into everlasting life. He was preceded in death by his father and his wife, Jan. Juni and his sister, Carliss, were raised as a part of their larger family with their grandfather and grandmother (“Daddy” and “Mama”) and aunts and uncle. Therefore, he learned at an early age the importance of love, family and hard work. These and so many other honorable qualities proved to remain the foundation of his life. As a young man, Andrew had a love of art as well as sports. He enjoyed dancing and making people laugh. As a young man, he was a member of the Blue Flames, a basketball team that was a part of a city-wide league. He received his high school diploma from St. Elizabeth High School, enlisted in the U.S. Air Force and married his high school sweetheart Nellie (Gray) Prestwood. After the Air Force, he went to Bishop College in Texas and was one of the initiators of the civil rights movement on campus. It was also during his time that his only child, Shunda, was born. After his time at Bishop, Andrew joined American Airlines which eventually brought him back to Texas. It was during his 25 years at American Airlines that he met and married the love of his life, Janola (Young) Prestwood. During his time with the airlines he expanded his love of art and reading by becoming a collector of African-American art and rare books. After retiring, he went on to complete his degree at Paul Quinn College and eventually became the President of the Ft.Worth Chapter of the Paul Quinn National Alumni Association. He began to rekindle his childhood talent of drawing with lessons at several studios. He developed a passion for golf in addition to his love for music. As a retiree, he also served as a substitute teacher in the public-school system. The legacy of Andrew Z. Prestwood, Jr. will forever live on in our thoughts, words and deeds. His persistent spirit, his gleaming smile, and unforgettable laugh will continually be cherished and honored by: his daughter, Shunda (Ramon) Caceres; his grandchildren, Cid’Ni and Joe Wilkerson; his mother, Eldridge Biloche; his sister and brother, Carliss Arnold and Joel Biloche; his step-sister, Patricia (Johnny) Davis; and a host of other relatives and friends.

The family of Andrew Z. Prestwood III created this Life Tributes page to make it easy to share your memories.

Andrew Zenoble Prestwood III affectionately known to most as...

Send flowers to the Prestwood family.