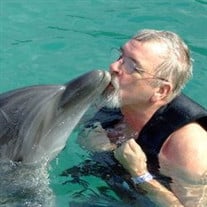 Gordon Wayne Petty passed away Sunday, September 28, 2014 in his home in Midlothian, TX.  A celebration of Gordon's life will be held at 1:00PM, Saturday, October 4, 2014 at Creekwood Church.  In lieu of flowers, donations can be made to the Pancreatic Cancer Action Network. Gordon was born in Newark, New York on July 7, 1949 to Herbert and Beverly Petty. He married Sherry Petty on August 19, 1984 in Houston, Texas. He has been in the Midlothian community since 2005 and has been a member of The Mankind Project - New Warrior community since 1999. Gordon spent most of his adult life in the IT field where he retired as a Project Manager. He will be deeply missed by his family, friends, and everyone who had the opportunity to know him. He was preceded in death by his father, Herbert Wayne Petty; his step-father, James Breen; his father-in-law, Samuel Neill Martin; his step-father-in-law, Charles Eugene Owens; and various aunts, uncles, and grandparents. Gordon is survived by his wife of 30 years, Sherry Petty of Midlothian, TX; his mother, Beverly Petty-Breen of Macedon, NY; daughter, Jennifer Gould of North Richland Hills, TX; sons, Christopher W. Petty and wife, Melanie of Little Elm, TX; Christopher M. Petty and wife, Kristen of Midlothian, TX; David Petty and wife, Brooke of Midlothian, TX; and Corey Petty and wife, Erin of Cleveland, OH; grandchildren, Bailey Gould, Braiden Petty, Ethan Petty, Brenna Petty, and Colbi Petty; brother, Steven Petty of Carrie, NC; sisters, Cheryl VanHarken and husband, Gary of Newark, NY; Terri Pearce and husband, Scott of Canandaigua, NY; and Lori Healy and husband, Rick of Newark, NY; mother-in-law, Joyce Owens; sister-in-law, Karen Besterman; step-sister-in-law, Kim Lewis; step-brother-in-law, Gene Owens; and numerous nieces, nephews, aunts, and uncles.

The family of Gordon Petty created this Life Tributes page to make it easy to share your memories.

Send flowers to the Petty family.