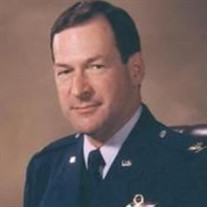 Stephen I. Robertson, Colonel USAF (retired) passed away peacefully on Monday, October 17, 2011 in Arlington, Texas after battling a long illness. Col. Robertson was born December 5, 1950 in Richmond, Virginia. He graduated from Virginia Tech with a BS degree in Mechanical Engineering in 1972 and a Masters degree in Engineering Management. In addition he earned Masterâ€™s degrees from the Naval War College and the University of Utah. After graduating from Virginia Tech, Stephen joined the Air Force as a pilot. His career included service as a pilot flying F4 and F15 fighter jets and assignments at the Pentagon and Langley Air Force Base. He retired from the Air Force after 25 years. Stephen is survived by his wife, Kimberly, her two children Courtney and Jason, and two grandchildren. He is also survived by his parents, Jean and Ingram (Inky) Robertson, of Richmond, Va., his three sisters; Helen Yates and husband Jim, of Virginia Beach, Va.; Alice Robertson and husband Mike Hughes of Carrboro, NC.; and Louise Middleton and husband Bill of Manheim, Pa. as well as 8 nieces and nephews and a large extended family. A memorial service will be held at 2:00 pm, November 5th in Richmond, Virginia at Christ Ascension Church, 1704 W. Laburnum Ave. Interment at Arlington National Cemetery will be at a later date. In lieu of flowers, donations may be made in his memory to The Virginia Tech Corps of Cadets, Blacksburg, Va., or the Air Force Aid Society.

The family of Col. (ret. Usaf) created this Life Tributes page to make it easy to share your memories.

Send flowers to the Usaf) family.