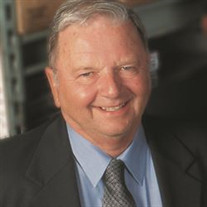 Robert LeRoy DeMott, 75, passed away September 6, 2014 in an Arlington hospital. A private memorial service celebrating his life will be held on Friday, September 12. In lieu of flowers, donations may be made in Bob's memory to the Cystic Fibrosis Foundation, Fort Worth Office, 3840 Hulen Street #600, Fort Worth, TX 76107. Please call (817) 249-7744 for assistance. Bob was born June 17, 1939 in Denver, Colorado to Dominic and Louise DeMott. He grew up in Van Nuys, California.  He served in Japan with the United States Air Force.  He was a sales manager for M&M Mars.  In 1974, Robert moved to Texas and began working for Tom Gulick and Associates.  He was later president of T-BAR Brokerage.  In the early 1990s, Bob founded TNT Marketing, a convenience store brokerage. In more recent years, he was involved in entrepreneurial efforts in North Carolina.  Over the years, he enjoyed hunting, fishing, golfing, investing and writing poetry.  Bob's far-reaching generosity and larger-than-life personality will be forever remembered by those who knew and loved him.   Survivors: wife Sheila DeMott of Mansfield; son Jason DeMott, his wife Marian and their children Ella, Willing, Turner and Briggs of Fort Worth; son Brent DeMott of Arlington; stepson Shawn Scruggs and his son Casey of Robert Lee, TX; stepson Lance Scruggs and his wife Jenny of Ashville, NC; step-daughter Stephanie Taylor, her husband Dustin and their children Brandt, Mason, Avery and Kenley of Mansfield; brothers, Nick, John, Donald and Marc DeMott, all of Loveland, Colorado, David Prudeaux of Palm Springs, CA and Danny Prudeaux of Atlanta, GA; sisters, Bunny DeMott of Boston, MA, Sherie Landon of Lake Elsinore, CA and Debbie McCaffrey of Simi Valley, CA; numerous nieces, nephews and other relatives.

Robert LeRoy DeMott, 75, passed away September 6, 2014 in an Arlington hospital. A private memorial service celebrating his life will be held on Friday, September 12. In lieu of flowers, donations may be made in Bob's memory to the&#160;Cystic... View Obituary & Service Information

The family of Robert DeMott created this Life Tributes page to make it easy to share your memories.

Send flowers to the DeMott family.